The Use of Agricultural Waste as an Organic Fertilizer 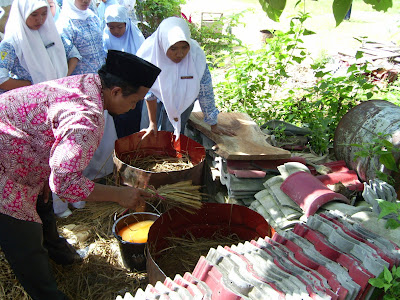 From this background of situation, we set up a series of activities in a climate challenge project—namely “The Use of Agricultural Waste as an Organic Fertilizer”—so that the farmers especially in Madura utilize the agricultural waste as an organic fertilizer to support their work. Actually, traditional farmers in Madura in past time make use of any organic materials as a fertilizer. But the shift of paradigm in the farmers’ mind pulled out their environmental awareness.

For about four months, we had managed some environmental programs and activities to achieve this objective. Those programs include socialization in several school communities and people association around Sumenep district to promote the use of agricultural waste as an organic fertilizer. This program aimed to spread out information and environmental awareness among people.

Our other main activity in this project is production of organic fertilizer with straw as a basic material. In this process of production, students learned and had scientific experiment that could be a valuable experience for them. During this project, our team had done two experiments/productions in our school. The organic fertilizer that we produced had already tested in our laboratory, and the result is positive.

Responses from school communities and people were very good. They not only supported our project, but they also stated that they want to make the same project in their communities. Such statement appeared in the socializations and exhibition that we had held. Based on this fact, we planned to have assistances more intensely to farmers to produce and use organic fertilizer with straw as a basic material.

Another support from our project came from mass media. Radar Madura, popular local newspaper in Madura, wrote about our activities at two editions. Beside that, Madura Channel and TVRI also came into our school and broadcasted our project.