Saving the Earth from the Hazard of Plastic Rubbish: Toward Ecofriendly Life Style 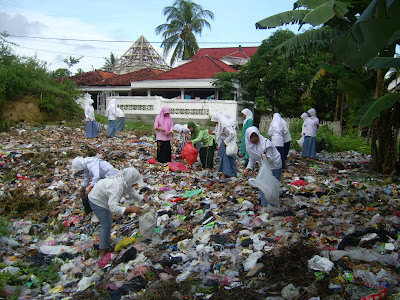 Contemporary people have a minor sensitivity to conduct with nature. They used to do something and had no painstaking consideration about the impact of their behavior. The massive use of plastic as a popular package in Indonesian society in general illustrated their unawareness about the hazard of plastic rubbish. Plastic packages are not just unfriendly to the environment but also dangerous to human health. Kompas (August 6, 2008), national daily newspaper, reported that during 2008, 2.1 ton million of plastic and any product made of plastic had produced, and 952 ton thousand of it was used as packages, and 80% of it was potential to be dangerous waste. Plastic gives a practicality of use to the people but has no good impact for the nature.

From this background of situation, we set up a series of activities in a climate challenge project—namely “Saving the Earth from the Hazard of Plastic Rubbish: Toward Ecofriendly Life Style”—to anticipate serious threat of plastic rubbish. This project aimed to disseminate information and awareness concerning to the hazard of plastic rubbish among school communities and others, so that the students and people will have a concrete contribution to save the earth and give a simple, precise, consistent, and integrative responses to the climate challenge.

For about four months, we had managed some environmental programs and activities to achieve this objective. Those programs include socialization in several school communities and people association around Sumenep district, television and radio talk show, etc. This program aimed to spread out information about the hazard of plastic rubbish. We also had collected plastic rubbish from Annuqayah landfill near our school as a campaign against plastic rubbish.

Our socialization and campaign had succeed decreasing plastic rubbish around school and people’s neighbourhood by reuse the rubbish to be a creative accessories, like school bag, etc. The production of these creative accessories was just as a medium to arise people’s awareness about the hazard of plastic rubbish. By doing this activity, we had received good support from school communities and people to reduce increasing volume of plastic rubbish by collecting the rubbish and give it to our team to be produced. We also sold those products in an exhibition, so we also had a financial support for our own environmental activities.

The best achievement of out project is about support and response from school communities and people in general. Some schools that were our partner—we socialize there—now are trying to develop the same environmental activities in their schools.
To assure sustainability of this project, we planned to recruit new cadres in our school, organize capacity building for our team and community, develop educational network on environmental issues in Sumenep, and other supporting activities and programs.